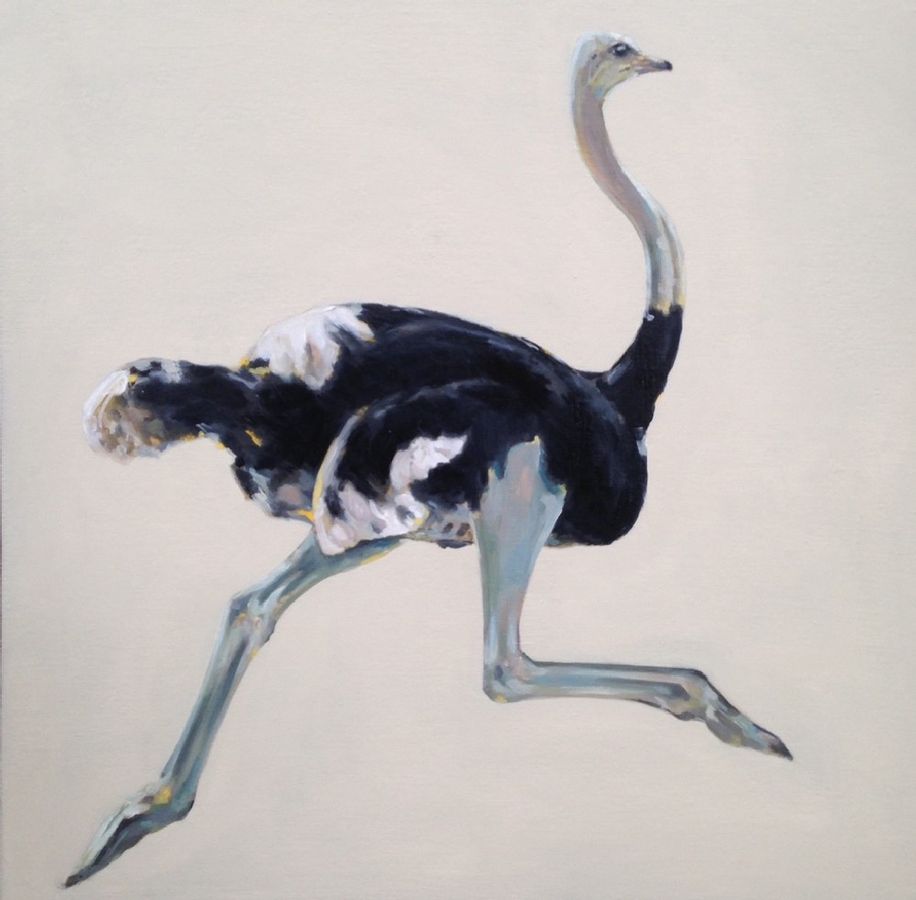 1. When you were a child, what job did you picture yourself having as an adult?
As a young child I wanted to do anything that involved a typewriter or a till so I could press the buttons. At school I wanted to be a translator as I loved languages.

2. When did you first realise you wanted to be an artist?
My desire to be an artist came and went during the sixth form and at art school. I was keen initially but I was worried whether the lifestyle would suit me: working alone and being self-reliant and self-motivated. At the time I left education I was probably too young for it and wanted to work with people so I started out in film sales.

3. Were you good at art at school?
I was always above average. I can remember friends giving me pictures to finish for them when I was about 10. At senior school I won the art prizes but I wouldn’t consider that I was a child prodigy!

4. Do you remember the first exhibition you went to?
I visited the studio of a well-known artist and family friend when I was about seven and my mother always says that’s why I became an artist. My first major memory of visiting galleries was on a trip to Paris with school. Going to the Louvre, the Rodin and Picasso museums and seeing amazing art in the flesh made a huge impression.

5. Which artist do you most admire?
I can’t choose one, there are hundreds, but currently I would say Alex Kanevsky, Nathan Ford and Jenny Saville.

6. Which talent of theirs do you covet?
Their contemporary take on figurative painting: looseness of brushwork, amazing use of colour, edgy compositions, a combination of lines and sharp marks with big painterly brushstrokes.

7. If you could own any one painting in history, which would it be?
Again, there are too many to choose from. I love everything from Rembrandt to Russian Constructivism so it’s hard to narrow it down. Possibly Whistler’s Mother, Stubb’s Whistlejacket or Peter Doig’s Ski Jacket, which I see have linked names, weirdly!

8. What’s the best exhibition you’ve seen recently and why?
The Leonardo portrait show was pretty amazing but one I still remember that had a big impact on me was the Modernism exhibition at the V&A. It was absolutely packed with incredible art and design.

9. Is there one place that’s had a decisive influence on your work? If so, in what way?
Africa. I had always been interested in wildlife but going to Kenya in 2000 really ignited a passion. I lived in South Africa for 18 months and started my painting career there.

10. Where in the world would you like to spend six months making your art?
In Italy. It has everything: art, architecture, delicious food, sea and lots of sun.

11. What subjects are you always drawn to in your work and why?
Always animated things: people and beasts.

12. If applicable, which colour do you find yourself using in your work more frequently than others? Is there a reason why?
I often mix browns with blues, most often Raw Umber and Prussian Blue. The variety of tones you get with the addition of white is gorgeous. It’s often the least likely combinations that make amazing colours.

13. How often do you produce a new picture, on average?
It varies a great deal depending on size and media but probably about one every fortnight.

14. What’s your studio like?
It is a temporary studio in a room in our house until we build one in our garden. The new one has been designed by my husband, Sam, and we are hoping to send it to the planners soon.

15. How do you relax?
Hanging out with my buddies, having a glass of wine and cooking for people.

16. What’s your most treasured possession?
Either our dog, Snorkel, or a rectangular gold locket necklace that I wore at my wedding which belonged to my husband’s grandmother. I would be so upset if I lost it.

17. What’s your guiltiest pleasure?
Lying in the bath with the laptop propped on the loo watching episodes of Girls.

18. If you could go back in time, when and where would you go?
Probably to the 1910s. Beyond the awfulness of the war it was a really interesting time of change both in the art world and for women. Like in Any Human Heart [by William Boyd], it would be great to hang out in Paris.

19. What plans do you have to develop your art?
I would like to do fewer commissions and perhaps do an MA in the future so I have time to experiment more.

20. How would you like to be remembered?
Even if I am not remembered personally it is rather lovely to think that my pictures will be on people’s walls for many years to come. It’s particularly amazing to think that someone will look at a portrait I have painted of their relative in five or six generations’ time.