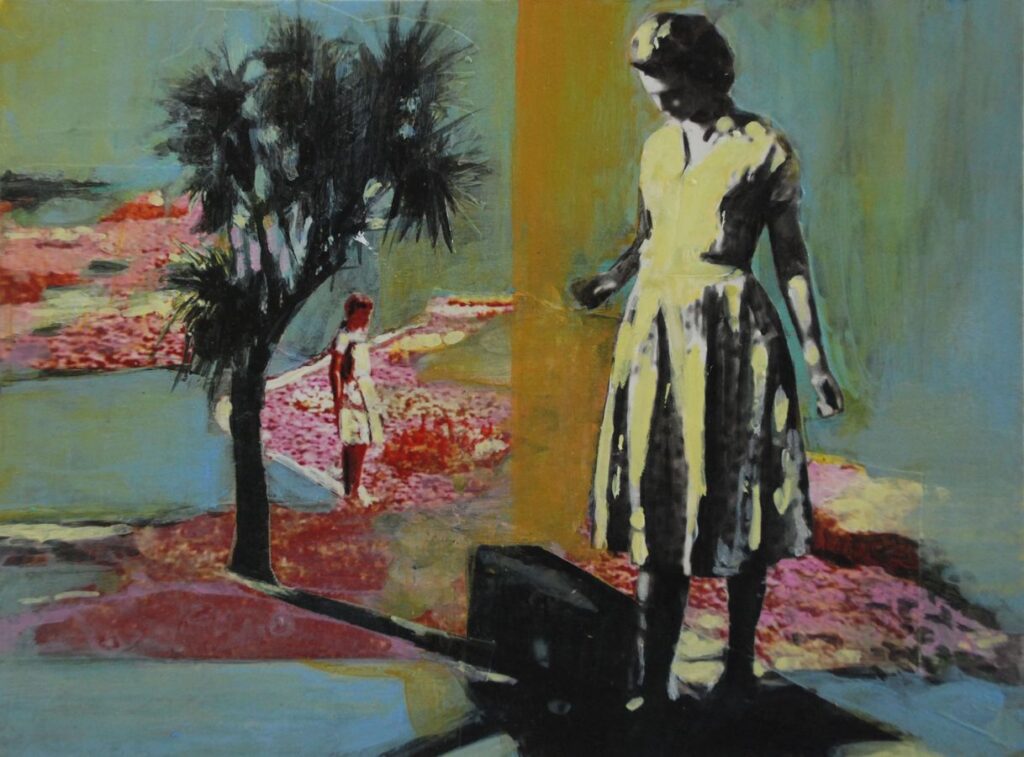 1. When you were a child, what job did you picture yourself having as an adult?
I don’t think I ever really thought about it and if I did I don’t remember, although my career advisor said I should be a florist.

2. When did you first realise you wanted to be an artist?
Difficult question. I always tended be making things, drawing and painting so I suppose it was just something that was natural to me rather than a specific career choice.

3. Were you good at art at school?
I enjoyed it but didn’t get much focused art teaching: lessons were generally sitting in front of a still life or creating a response to a title with block paints and pencils, however I did study art books and magazines at home.

4. Do you remember the first exhibition you went to?
Not my first exhibition, but one of the most eye-opening ones was Monsoon by Charles Garrad at the old Ikon Gallery in John Bright Street, Birmingham, which was recently recreated on a smaller scale for their 50th anniversary. I just sat and took it all in – the installation, the sound, I’d never seen anything like it before in a gallery.

5. Which artist do you most admire?
There are so many, I couldn’t pick just one. I am a great admirer of the Leipzig school of artists, but also love works by Prunella Clough and Terry Winters, to name but a few. The list would be endless, I keep a little book with them all in!

6. Which talent of theirs do you covet?
I covet the ability of other artists to effortlessly manipulate paint, combine disparate images into a coherent whole and create beauty and tension within a single image.

7. If you could own any one painting in history, which would it be?
I find it difficult to make absolute decisions, so for me this would be an impossible choice. My preferences change depending on the work I am producing and who/what is influential to me at any one time, however a Goya portrait with exquisite lace detail or perhaps The Swing by Fragonard might currently be close to the top of the list, although the responsibility of it would probably be too much to deal with.

8. What’s the best exhibition you’ve seen recently and why?
Without a doubt Michaël Borremans As Sweet as it Gets at BOZAR Centre for Fine Arts, Brussels. His draughtsmanship is something else.

9. Is there one place that’s had a decisive influence on your work? If so, in what way?
I suppose I would have to say my current studio. It’s where I have made the most creative leaps and bravest decisions in my work to date.

10. Where in the world would you like to spend six months making your art?
I have always thought that Porthmeor Studios, St Ives, is an enviable location, but I have to say Capri looks pretty good too. I have been studying old black and white films recently such as Roberto Rossellini’s Journey to Italy with Ingrid Bergman, and for location, light and drama it ticks all the boxes. Any of the great gardens of Southern Italy would also be a phenomenal source of inspiration.

11. What subjects are you always drawn to in your work?
Isolation, uncertain moments and the aspirations of the working classes.

12. Which colour do you find yourself using in your work more frequently than others?
Old Holland King’s Blue Light is a particular weakness but used sparingly.

13. How often do you produce a new picture, on average?
It varies, depending on studio days but there is always something on the go, though often paintings have to ‘sit’ for some time before completion.

14. What’s your studio like?
I belong to Birmingham Artspace. We have studios in the roof of a 1930s factory unit. Great light, but often freezing. At the moment I would describe my space as productive but too full!

15. How do you relax?
I haven’t mastered the art of relaxing yet.

16. What’s your most treasured possession?
My camera would definitely be high on the list.

17. What’s your guiltiest pleasure?
Dean Martin, an episode of The Rockford Files and a Daphne Du Maurier novel.

18. If you could go back in time, when and where would you go?
It would probably have to be a British seaside town in its heyday.

19. What plans do you have to develop your art?
I am currently working on a photographic residency, so I am extending my previous experience with film and projections. I am also continuing to develop my works on paper as drawing has become a mainstay within my practice.

20. How would you like to be remembered?
I have always wanted to have a book of my work on a library/gallery shelf. I love browsing and discovering catalogues with new artists who inspire me. If I could be that book for another student/artist, I think I would feel like I have contributed in some way.