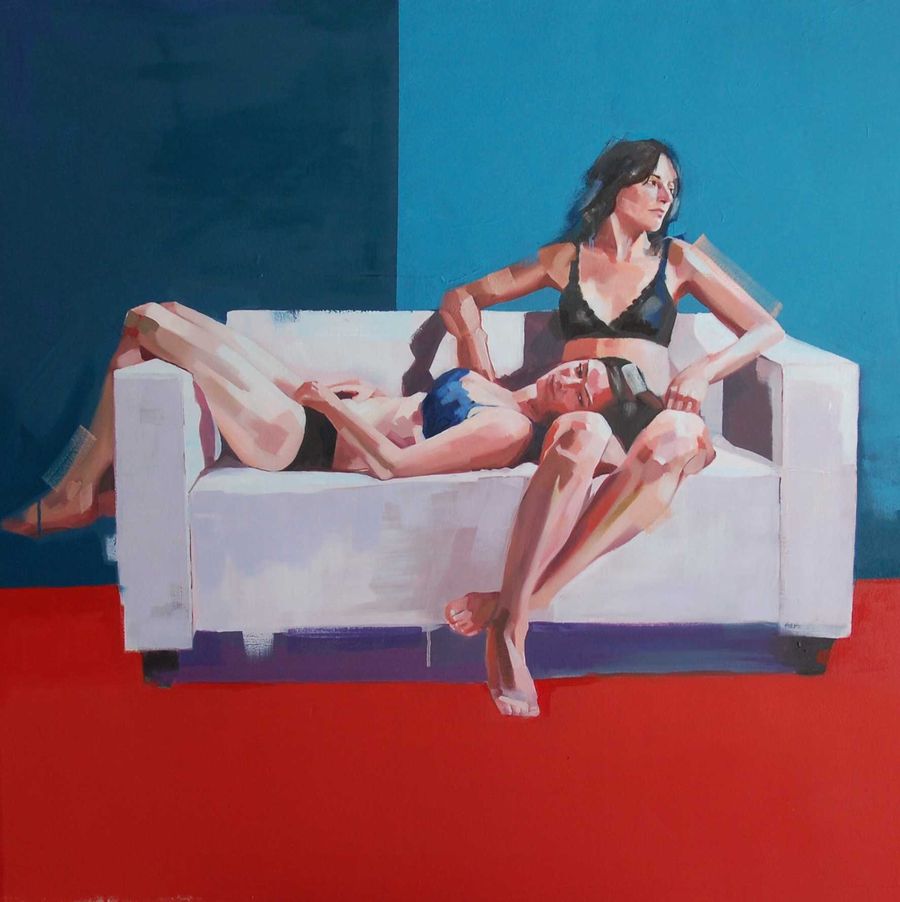 1. When you were a child, what job did you picture yourself having as an adult?
An animal rights activist and a clothes designer. I felt compelled to multitask from a young age.

2. When did you first realise you wanted to be an artist?
I always knew I’d do something creative. My parents still have a crayon drawing I did of my uncle when I was four. It bears an uncanny likeness to him (if you squint a bit).

3. Were you good at art at school?
According to my grades I was, but I didn’t have much confidence.

5. Which artist do you most admire?
Many, for a whole host of reasons, but Euan Uglow for his obsessive accuracy and Frankenthaler for her reckless risks that paid off.

6. Which talent of theirs do you covet?
Uglow’s commitment to recording, whilst still allowing the viewer a notion of possibility. Frankenthaler’s faith in her forms and her ability to know when to stop.

7. If you could own any one painting in history, which would it be?
Probably something by John Singer Sargent: Fumée d’Ambre Gris or The Spanish Dancer.

8. What’s the best exhibition you’ve seen recently and why?
I saw the Jeremy Deller exhibition at Bristol Museum & Art Gallery last year and I really enjoyed his film installation. Also Oneself as Another at the RWA, a really varied approach to portraiture which included Freud and Bacon, as well as contemporary emerging artists. Exhibitions that contextualise the very new against the well established are always dynamic and thought-provoking shows.

9. Is there one place that’s had a decisive influence on your work? If so, in what way?
Bristol. This city is full of creativity, not just in the arts but in terms of creative, progressive thinking. Self-expression feels natural, achievable and essential. It offers unconditional creative opportunity and it has allowed me to grow as an artist.

10. Where in the world would you like to spend six months making your art?
Berlin. I’ve been several times but have only scratched the surface. There’s a hardness and hostility about the city – it makes me nervous, and I think that energy would be an exciting influence on my work. It wouldn’t be idyllic but it would be authentic. It would be a challenge.

11. What subjects are you always drawn to in your work and why?
I’m influenced by my immediate environment, but more so by the people I spend time with. My female friends interest me; their strength, integrity and talent have inspired my latest series.

12. Which colour do you find yourself using in your work more frequently than others? Is there a reason why?
There isn’t one colour. I like the idea of subtle, calm neutrals, but I seem to be drawn to a warm palette.

13. How often do you produce a new picture, on average?
I work successfully in three-hours bursts, then start to make mistakes. If I work for long days I can finish a picture in three days, but more often than not it takes a few weeks.

14. What’s your studio like?
I share a space with a good friend but our paths rarely cross. I’ve only just moved in so it’s pleasantly uncluttered for the time being. We have a gold curtain as a door so it feels like a showbiz entrance every time one of us comes in.

15. How do you relax?
I don’t much. Painting is an escape but it’s active so it’s not restful. I have a one year old who has just started walking. I relax when she’s asleep – normally with alcohol.

16. What’s your most treasured possession?
I never seem to be able to hold on to possessions for long. But there is a tiny, oval black and white photograph of my mum when she was 18 that I would be upset about if I lost.

18. If you could go back in time, when and where would you go?
To a dancefloor in the early 1950s, when dancing really meant dancing. Or to a Rolling Stones gig in the late 60s.

19. What plans do you have to develop your art?
My only plan is to just keep making. Ideas come and go. The important ones don’t feel like plans, they arrive like fortuitous disasters.

20. How would you like to be remembered?
With a wry smile.