When Dan Parry-Jones started painting professionally in 2008 he was drawn to depicting the north Cornish coastline, an area he knew well from holidays. Seascapes remain a recurring theme, although his work is inspired by a variety of places. Recent trips to beautiful Italian and Moroccan cities have provided the basis for many of his paintings, but he also finds beauty in the mundane and is just as likely to photograph a row of dirty, battered garage doors or broken windows in his home town of Bristol and incorporate those images into his compositions through the medium of screen-printing.

For Dan, the most exhilarating and challenging part of being an artist is having an idea and seeing it develop and change. He is as much excited by the physical practice of painting as by the end result.

His process is cyclical: Dan begins with a mental vision of the painting, the various elements appearing like film stills in his mind; he starts working, but as he progresses he invariably finds himself following a new, unplanned direction; as a result, the final piece often differs considerably from the initial vision. “It is this struggle between adhering to a plan and allowing the automated side of the brain to take over and create something else that results in my strongest work,” Dan says.

Dan’s unique mixed media process involves photography, screen-printing, drawing, painting and collage. Although taking, cropping and adjusting the photos require his creativity, the photographs represent reality, a moment in time, a piece of history, and a certain rigidity and formality. Using screen-printed photographs gives Dan the freedom to be expressive and loose with paint. He thrives off the contrast and tension between the two mediums, which ultimately enhance and complement each other.

As far as the physical process is concerned, Dan usually works on primed board and begins by putting down patches of coloured paint and paper collage elements cut out from newspapers and magazines. Next he screen-prints the details on (figures, vehicles, buildings etc. that he has photographed and sometimes drawn by hand) to work out the composition. He then builds up areas of thick impasto acrylic in layers with a palette knife. When each layer is dry, Dan scores and scrapes the paint to create more and more texture, often defacing most of what he has already made.

Lastly he sands areas to flatten them ready for the final screen-printing, when he prints the figurative detail again in darker tones on top of the paint. He finishes by applying a layer of varnish to seal any loose flakes of paint or collage. 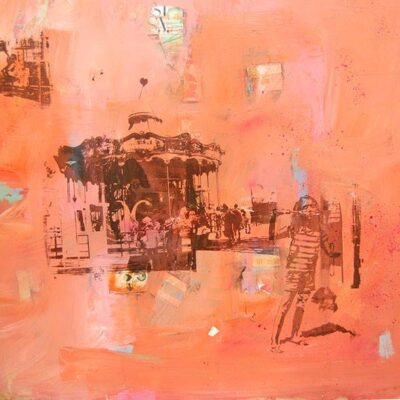 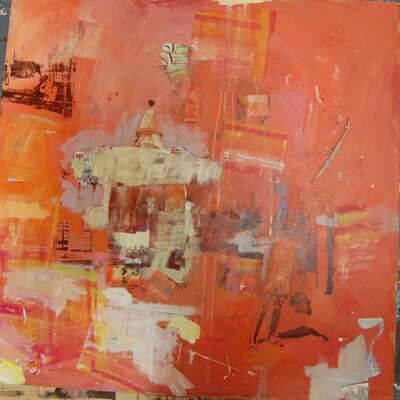 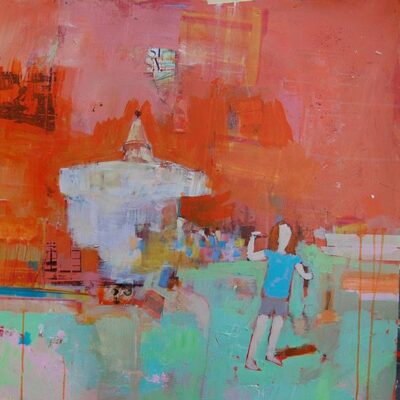 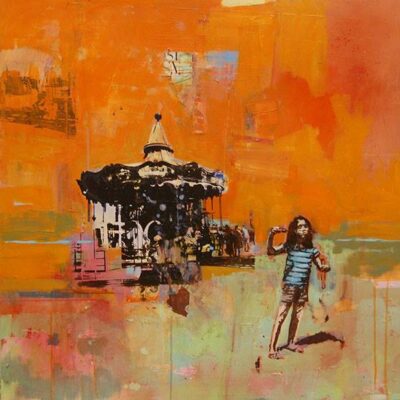